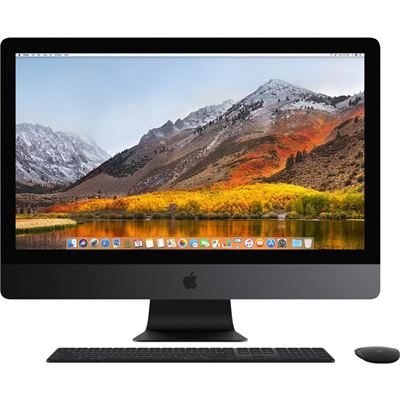 We source this product from more than one supplier so take your pick!

Power to the pro.
Pros love iMac. So we created one just for you. It's packed with the most powerful graphics and processors ever in a Mac, along with the most advanced storage, memory, and I/O - all behind a breathtaking Retina 5K display in a sleek, all-in-one design. For everyone from photographers to video editors to 3D animators to musicians to software developers to scientists, iMac Pro is ready to turn your biggest ideas into your greatest work.

Up to 18 cores in an iMac. No, that's not a typo.
An iMac with 4 cores is remarkable enough. But an iMac with 8, 10, 14, or 18 cores is an entirely different creature. Add Turbo Boost speeds up to 4.5GHz, and iMac Pro has the power and flexibility to balance multicore processing with single-thread performance. With new AVX-512 vector instructions and a new cache architecture, the processor handles even more data - even more quickly. Which means you can render images, edit up to 8K video, manipulate photos, create real-time audio effects, or compile your next five-star app - all at lightning speed.

Particle simulation? Elementary.
Billowing smoke. Torrential rain. A wheat field in the wind. With up to 18 cores and Hyper-Threading, iMac Pro lets you build and render particle systems of all kinds - static or animated, 2D or 3D - with ease.

Vega graphics. The beast behind the beauty.
Featuring Radeon Pro Vega graphics, iMac Pro delivers the best workstation-class graphics of any Mac. The first Mac with Vega architecture features up to 16GB of High Bandwidth Memory, which helps deliver a major jump in performance - up to two times faster than any other iMac GPU and up to three times faster than the GPU in Mac Pro. This translates to higher frame rates for VR, real-time 3D rendering, more lifelike special effects, and gameplay at max settings. It also supports both single- and half-precision computing, so operations that don't require a full 32 bits of precision can be performed twice as fast. How fast? Up to 22 teraflops fast.

Virtual reality gets real.
With the new Vega GPU, iMac Pro lets you do more than just immerse yourself in VR worlds. It lets you create them from scratch.

Strength in numbers.
iMac Pro is optimized for performance across the board. Here's how it compares to iMac and Mac Pro.

More memory for massive projects.
With four channels of memory, iMac Pro can accommodate up to 128GB. So you can visualize, simulate, and render huge 3D models. Create multiple test environments for cross-platform development. And keep numerous apps open at the same time. It's all powerful. For all the things you want to do.

High-performance storage. Load faster. Launch faster.
Up to 4TB of all-flash storage lets you work on large 4K and HD projects regardless of codec. And with up to 3GB/s throughput, loading huge files and launching apps is faster than ever.

Video performance artist.
iMac Pro has the bandwidth to effortlessly handle multiple streams of video. And with up to 4TB of all-flash storage, saving and loading humongous projects is all in a moment's work.

Be the first to write a review

View all Desktop PCs/workstations from Apple

END_OF_DOCUMENT_TOKEN_TO_BE_REPLACED

If you're after a number of items let us know and we'll see what we can do.

We're here to help so let us know what you're after and we'll see what we can do.